Classic Irish indie from the 90s 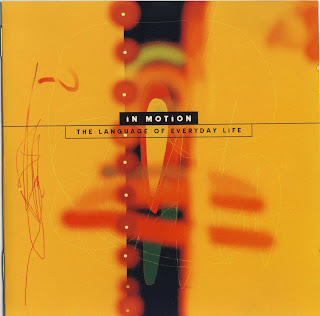 I know I'm supposed to be finishing this chapter, but I was so excited about this discovery that I had to post. Around 1994 and 1995, I was studying for my Leaving Cert (shudder) and I would have Dave Fanning on between eight and ten every school night while I was doing my homework. Whenever I heard something I liked, I would scribble a note in my homework notebook. Then, next time I heard it, I would tape it. (Yes, it was a long time ago!) If I'd taped more than two songs off a particular album, it would go on my list of wanted albums. Unfortunately, the list always far outran my financial means, and one of the albums I never got round to buying was The Language of Everyday Life (Dead Elvis Records) by a Dublin band called In Motion. They were a bit shoegaze, a bit C86, a bit Cocteau Twins, and totally brilliant. (They had a video featured on No Disco in which their drummer wanders around Dublin in a nice frock.) Fast forward some years, and I would often find myself wondering what happened to them and where I could find that album. No myspace page, no videos on youtube, seemingly nothing. Did no-one else remember how good they were? Well, as I have just discovered, the folks over at Indiecater records do, and they have done a digital release of the album. You can hear one of the album's highlights, "Hollow Blow" here-- just scroll to the bottom. Apparently they would like to do a vinyl release, which I think would be terrific. Incidentally, if you take a look at the site, you'll also find classic albums by Sunbear and The Brilliant Trees. Enjoy!
Posted by Ornaith O'Dowd at 4:28 PM

I write and record music that you might like if you like The Cure and The Smiths and such. You can find out all about it here. I'm also assistant professor of philosophy at the University of Cincinnati Blue Ash College. If you've been listening and enjoying, do say hello and/or ask a question. For philosophy stuff, go here.

Free downloads of E.P.s and albums!